EVENT CANCELLED. Please contact your ticket point of purchase to claim a refund on your tickets.

Singer, songwriter and actress Mandy Moore comes to Bob Carr Theater on Wednesday 8th April 2020 on her first tour in over a decade! The teen pop sensation turned Screen Actors Guild Award-winning actress will be performing a variety of songs, both recent and from her extensive back catalog, in a cosy, up-close-and-personal show!

"It’s been over a decade since I’ve hit the road but I am thrilled to put together an intimate, elevated evening of new and old tunes, performed with a superb group of musicians," Moore said in a press statement. 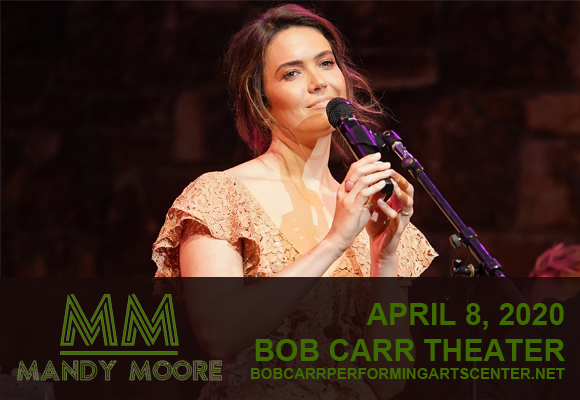 Rising to fame in the late-1990s as a teen pop star, Mandy Moore is an American singer-songwriter and actress. Moore found instant success with the release of her 1999 debut single, "Candy", and her debut album, So Real (1999) was certified platinum by the RIAA. Subsequently, she released five more studio albums over the years – I Wanna Be With You (2000), Mandy Moore (2001), Coverage (2003), Wild Hope (2007), and Amanda Leigh (2009) – steadily transitioning from manufactured bubblegum pop to writing her own songs in the style of singer-songwriters like Joni Mitchell. For the last decade, Moore has made her name as an actress, starring in films such as Chasing Liberty (2004), Racing Stripes (2005), Because I Said So (2007), License to Wed (2007), Love, Wedding, Marriage (2011), 47 Meters Down (2017), The Darkest Minds (2018), and Midway (2019). She also voices Princess Rapunzel for the Disney animated film franchise Tangled, and since 2016, she has starred as Rebecca Pearson in the NBC family comedy-drama series This Is Us, for which she has been nominated for the Golden Globe Award for Best Supporting Actress and the Primetime Emmy Award for Outstanding Lead Actress in a Drama Series, and won two Screen Actors Guild Awards for Outstanding Performance by an Ensemble in a Drama Series. She was awarded a star on the Hollywood Walk of Fame in 2019.