Country-pop singer-songwriter Jessie James Decker comes to Bob Carr Theater on Sunday 12th May 2019! The musician, model and star of Eric & Jessie: Game On will be performing brand new material and will be joined in support by special guests The Sisterhood Band – a duo made up of Alyssa Bonagura and Rod Stewart's daughter Ruby Stewart! 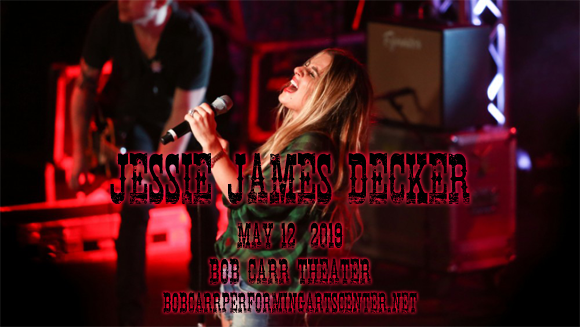 American country pop singer, songwriter and reality television personality Jessie James Decker began her music career at seventeen, when she was taken under the wing of Carla Wallace of independent label Big Yellow Dog Music, who helped her hone her talents in songwriting and singing. After attracting the attention of Mercury Records with her song "Gypsy Girl" (which had been pitched to American Idol contestant and winner, Carrie Underwood), Decker was signed to the label in 2008. The following year, she released her debut album, Jessie James, which debuted at number twenty-three on the Billboard 200. In 2013, she starred with her husband Eric Decker, a wide receiver in the National Football League, in the E! reality show Eric & Jessie: Game On. The show only aired for one season, but was picked up again in 2017. That same year, Decker released her second full-length album, and first for Epic Records, Southern Girl City Lights. This was followed by On This Holiday, her first full-length Christmas album, which was released in 2018.