Emmy Award-winning Latin and ballroom dancer, choreographer, actor, singer and Dancing with the Stars sensation Derek Hough comes to Bob Carr Theater on Thursday 11th April 2019 with Derek Hough: Live! His first ever solo show, Live! sees Hough combining each of his many talents to create a stage show that is dynamic, mesmerizing and truly unforgettable! A high-octane journey through the wonders of music and dance, Derek Hough: Live! is unmissable! 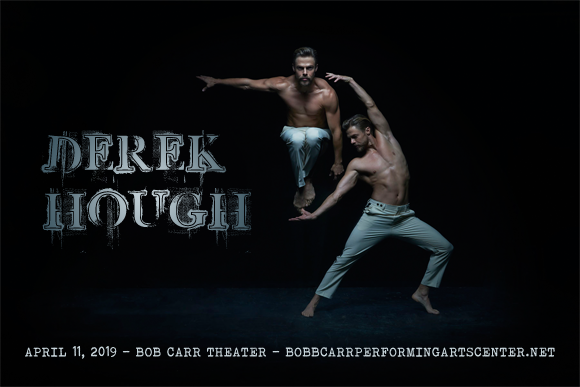 American professional Latin and ballroom dancer, choreographer, actor and singer Derek Hough is best known for his work on the ABC dance-competition series, Dancing with the Stars. Winner of two Primetime Emmy Awards for Outstanding Choreography (from nine nominations), Hough joined the show in 2007 and has won a record six seasons. Currently, he plays Noah West on ABC's musical-drama Nashville and in 2017, he joined the judges table in NBC's dance competition series World of Dance. Hough has also starred in several stage productions throughout his career, including the 2006 original West End production of Footloose: The Musical, as well as the 2015 New York Spring Spectacular. In 2013, he worked alongside world champion ice dancers Meryl Davis and Charlie White to choreograph a number for their upcoming 2014 Sochi winter Olympics short dance program that went on to win the pair a gold medal and make Olympic history.